This is a very simple guide to the start option of being “A guy and his dog”. I recommend playing it without the guide first and only checking this if you feel stuck. This guide is not guaranteed to give you the best results but I found the route described herein to be satisfactory.

Step #1: Get the Heck Outta Dodge

Ok, this part will become evident. You and your dog are starving, you have no cats (the coins of the world of Kenshi) and you are in the middle of a wasteland where the only residents are scavengers, cannibals, xenophobic crusaders, and the occasional giant mutant sand mosquito/antlion called a Skimmer.

This guide is not about the best race to choose, but if you choose a non-human (especially a Skeleton character) you are going to have many more problems. The area you start in is called Bast and the most survivable path out of Bast is to the northwest. Cannibals will be everywhere and you cant afford to fight them, as they could damage your leg and slow you down – basically resulting in your dog and possibly you starving to death before reaching a town. You can use the Holy Kingdom crusade mobs to stay safe from Cannibals since they will generally be wiping them out whenever they see each other. If you are a skeleton, the Crusaders will likely attack you on sight. Other non-humans can come close to Crusaders but its probably wise not to behave in an iffy fashion near them.

Which brings me to the next point: be a battlefield looter on your way north. You will be headed to the coast to the northwest of Bast, and you will barely have time to reach your destination, so mining copper isnt the greatest idea. Your goal is a fishing villiage that lies directly north of the huge mountain range far to the west of Bast. Be cautious about looting dead Crusaders near living Crusaders, as they will attack you. Also, the Crusader Armor is nice but if you are wearing it and come near a Crusader or any Holy Kingdom NPC they might notice you are ‘wearing a disguise’ and attack you for it.

I found that doing a bee-line can get risky as there are obstacles and roaming mobs just outside of Bast to the northwest. So, head south a small bit, then go directly west into the desert (the Holy Lands one, not the one due south as it is full of nasty things). Once you reach the edge of the desert, head north. Eventually you will come to a wooded area. Try to avoid the purple-colored zone. Make sure you are always running at your top sprinting mode, and use stealth most of the time. If you dont use stealth, you will run right into fights blindly, Only start sprinting without stealth when you get to the forested area.

Skeletons, by the way do not starve but your dog will still have this issue. If you somehow come across meat during the travel, you can use the build menu to make a campfire without needing any mats. To feed your dog, drop food on the ground. The dog will only eat one item every few game hours no matter how hungry it is. It also seems to only eat when it is near hunger level.
Your dog will have a high metabolism and needs to eat more often than most player characters.

If you made it to the fishing village with both you and your dog alive, congratulations! This is an area I found to be easier than the Hub starting area for the standard start scenario. The cannibals are easier to take on than starving bandits or dust bandits. Most of the wildlife doesnt attack other than a few stray bonedogs you might run across. Avoid them. Your pet is just a pup bonedog and though they are supposed to be stronger than your average bonedog, they have to grow up first.

You dont have to go to the pub to buy food, there are three fishmongers spread across town selling fish, and one hawks their fish right next to the town gate, which faces the ocean. There is also a general store that sells helmets, backpacks, rations, and building supplies/iron plates. To the south is a city called World’s End but you may wish to build strength and recruit some allies in the bar before heading there.

I found Hobbes, the standard free follower of Kenshi in the inn of the fishing village when I arrived, inviting me to have a drink with him. There were also a few people that wanted to get out of their podunk village, having developed a hatred for the smell of fish. There are a few small copper nodes to be found off to the west of the village and there is iron a plenty to mine. In addition, the cannibals constantly raid the village and you can make the funds you need to survive by looting them. Theyre not really difficult opponents, either and you can raise your strength and endurance fighting them with their own weapons.

Another alternative might be to try to make it to World’s End directly but sometimes critters lie in wait at the base of the mountain passes in there. All you need to do to try is get close enough to the edge of the mountain range and then you can click on the town on the map, and your characters will auto run through the passes to get there. But World’s End is distant from resources so you may find yourself seeking Flotsam Village to the west of there once you’ve caught your breath.

If you are interested in playing a character who has emnity towards the Church, Flotsam Village might be the place for you – but they still do not react well to Skeleton characters I think. The fishing village is an easy way to get started after the harrowing run from starvation and desolation.

The fishing village is a great starting point to get early stability in but it becomes limited fast. Furthermore, you are surrounded by the xenophobic Holy Lands (unless you like that kinda thing); the cannibal infested lands surrounding Cannibal City, a city taken over by Cannibals (!); and to the south of Bast is the United Cities, which is more of a mid-level area full of nasty criters such as the aforementioned skimmers and something called beak things….

So, build a small base for the time being and collect a few people into your crew – maybe two to four others other than you and your dog. Build a shack, a campfire, a research table, a copper ore container, and set up jobs of mining copper and hauling it to the ore container. Merchants may come who will sell you research books, use that to get the walls research done. This should be enough for the exodus. Because the only place nearby with decent shops is World’s End and it is surrounded by canyons with nothing in them to loot and sell. You will have to travel south eventually to broaden your horizons.

Take packs if you want (I didnt) and if you want to, dissassemble your base (I didn’t). Once you feel you have gotten what you need to get done done, head south to World’s End. You might as well stop by Flotsam Village to the west of it, too if you arent a skeleton. Both places have nice shops and there is ore right inside of Flotsam Village if you want to stay awhile and build up a purse of cats. The trek south will be arduous and hard won. Make sure you have enough food. I made the journey with at least one rations per character and 3-4 dried meats in each character’s inventory and arrived in The Hub with no food left (though only the Bonedog was actually hungry).

Exit World’s End on the east side of the mountain range, and follow the edges of the mountain south. Once you get to the tail end, you will head into a valley which leads into a caldera. Pass south through the caldera and you will reach the Border Zone. If you followed this route, you will come into the eastern reaches of the Border Zone, which is Church occupied but where Dust Bandit forts also exist. Avoid unknown forts, head south on the east side of the canyon until you come near a Waystation. The Waystation is locked and a guard watches the gate, so dont waste time heading there even though there is a bar. I think you need a Holy Book to enter.

When you spot the Waystation, head west until you come to the cliff edge overlooking the canyon. At this point, follow the trail south. This path allows you to avoid the Dust Bandits and potentially gettting up close and personal with a Dust King. Sure, theres a huge bounty on his head, but its probably better to get your bearings first.

After heading south for a bit, you will discover The Hub. It lies to the west, across the canyon. Simply head a bit futher south at that point, and south of the Waystation and the Holy Armory place – you will find a trail leading down into the canyon. A trail leading directly up to the Hub lies directly across from there. FYI, as an added bonus – you might run across some two-man high quality copper ore veins during the last leg of this trip. This might be useful if you end up out of rations and food like I did and need to resupply upon reaching The Hub. 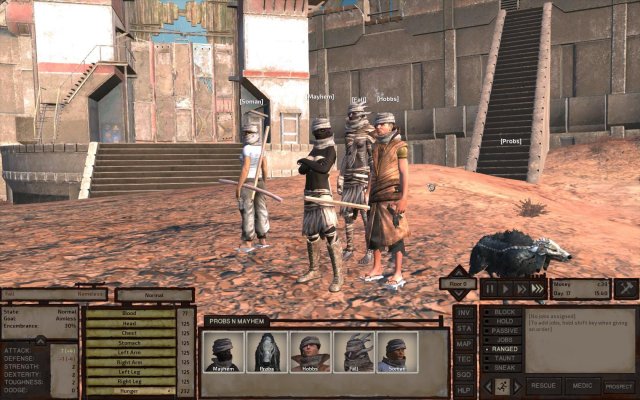